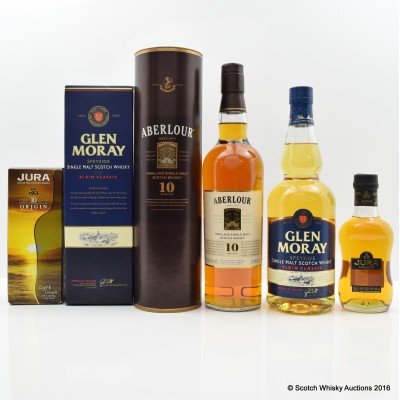 This 10 year old from Aberlour remains a perennial favourite, typical of the modern Speyside style and thoroughly approachable. Such is its popularity that this bottling has been exported to over fifty countries.

Converted from a brewery in 1897, the Glen Moray distillery was owned by Glenmorangie plc until it was purchased in 2008 by La Martiniquaise, the second biggest spirits company in France. Highly thought of for blending.

This is their Elgin Classic expression.

Located off the West Coast of Scotland is the Isle of Jura - where the red deer population outnumbers the human population by 5000 to 200. The island lies only 60 miles from Glasgow, (as the crow flies), yet can take rather a long time to reach.

Originally built in 1810, the distillery fell into disrepair and wasn't revived until the 1960s by two local estate owners. It is now under the ownership of Phillipines based "Emperador INC".