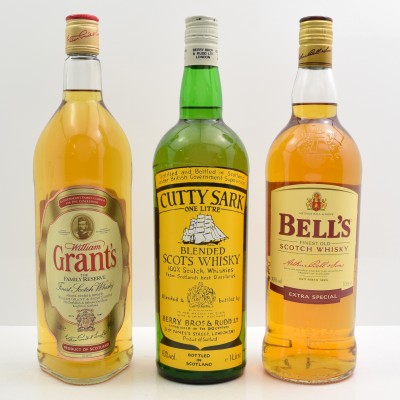 Cutty Sark's genesis was a lunch attended by Francis Berry, Hugh Rudd ( the partners of Berry Bros. & Rudd) and artist James McBey - who suggested the name. The lighter style was created for the American market, which at the time was still in the grip of Prohibation. The first Scotch whisky to sell 1 million cases in the USA its distinctive yellow label was initially a printer's error.

Launched by William Grant, founder of the Glenfiddich distillery, in 1898 Grant's is Scotland's oldest continuously family-run, blended whisky maker. William's rise from cattle herder to whisky baron is one of the great tales in Scotch.

Bell's blended whisky was created by Arthur Bell in Perth in 1851. Since then is has enjoyed huge popularity across the world. At its heart is malt from the Blair Athol distillery and from 1974 - 1993 Pittyvaich was used in the blend.

Please note, there will be additional shipping charges for this lot