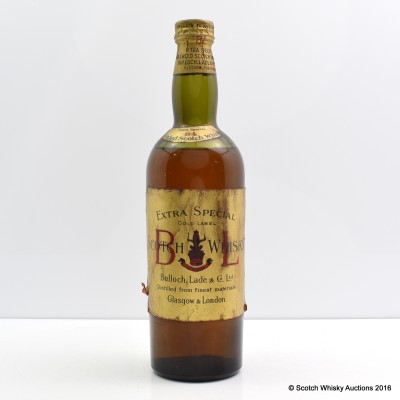 Bulloch, Lade & Co was once a prominent producer of Scotch whisky. Like so many of their contemporaries, Bulloch, Lade & Co did not withstand the combination of the economic fallout of the 1st World War, the rising coal and barley prices, and the introduction of prohibition in the US. In 1920 the company was liquidated. In 1927 DCL acquired all of their former assets, including the Caol Ila distillery. This bottle was released during this transitional period, as it dates from the mid to late 1920's. They continued to release a Gold Label blend under the Bulloch, Lade & Co name, until it was eventually dissolved in 2007.

No ABV or size stated

Please note the condition of the labeling and the fill level