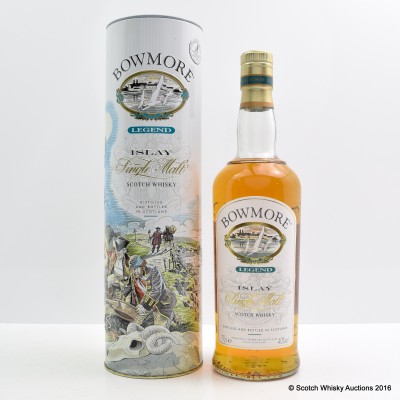 Legend has it, that long ago in the village of Bowmore, on the Island of Islay, lived an illicit distiller called Donnachie Mhor. He was loved for his good humoured pranks but loathed by the Customs man for his illegal whisky production.

Donnachie's infamous whisky still was old and leaking. Being a poor man he could not afford to replace it but devised a cunning plan. He carried the old still to the nearby peat moor, where it was buried and the spot marked with a sheep's skull.

Some weeks later he met the Customs man in the local Inn. In conversation, Donnachie explained that he had turned over a new leaf and his days of illicit whisky making were gone forever. The Customs man was pleased but suspicious, so to prove his new character, Donnachie volunteered to take the Customs man to where he knew an illegal still was hidden.

At midnight they set out across the peat moor. After much searching they found a sheep's skull and Donnachie suggested they start digging. As they dug through the soft peat they struck the copper still.

The Customs man, delighted with such a find, proudly carried the still back to Bowmore village where he and Donnachie enjoyed a few drams of the Bowmore Malt in celebration. Donnachie was given a handsome reward for reporting the illegal still. The reward enabled Donnachie to purchase a brand new larger illegal still!