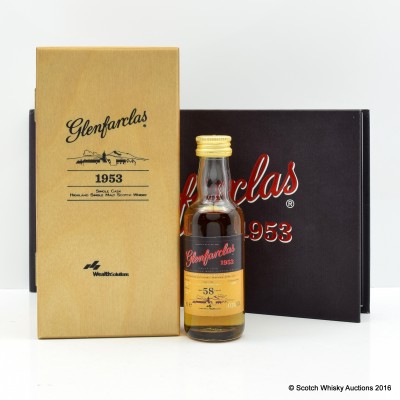 It was the year Edmund Hillary became the first man to climb Everest,. Glenfarclas laid down a bottle of whisky that year, too. The 58-year-old whisky was the oldest spirit ever to leave its walls. Only 400 numbered single cask bottles were put on the market.

The privilege of exclusive access to the distillery's rarest and oldest stock, the remaining 4 casks distilled in 1953, were given by George Grant, of Glenfarclas to a panel comprised of Serge Valentin, a whisky connoisseur and a key member of the internationally renowned Malt Maniacs, Ben Ellefsen, Sales Director for Master of Malt (Whisky Magazine's 'Global Online Retailer of the Year' 2012), Michał Kowalski of Wealth Solutions and George Grant himself. The panel was unanimous in their selection, and cask #1674 was selected to be bottled.

The chosen cask began its life in Spain, where it was used to mature and then transport fine sherry to Scotland. It was bought by Glenfarclas and filled with whisky on 20 November 1953. After 58 years of slow maturation in Glenfarclas' traditional Highland Dunnage warehouses, the 1953 cask yielded only 400 full 70 cl bottles. The whisky was bottled at cask strength of 47.2% abv and, of course, is naturally coloured and non-chill filtered

This mini is 5cl, comes in a solid wooden box and includes a booklet about the distillery.