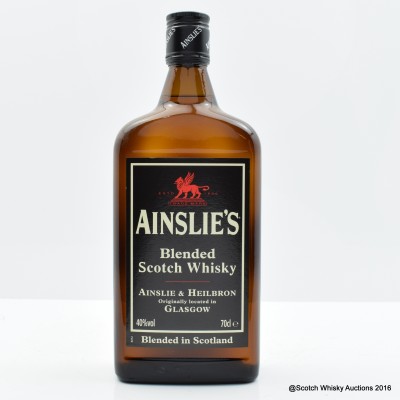 This company appears to be related to James Ainslie & Co, which was founded by Ainslie & co. (brewers of Burton-on-Trent Moss & Hume) as whisky merchants who principally operated out of Leith, In 1896 they acquired the Brora Highland Distillery and rebuilt it. The distillery was later sold on in the 1930's to Scottish Malts, though the company appears to have become its principal operators after the Second World War.

James Ainslie & Co went bankrupt in 1912. It appears that this company survived as the asset managers of the Brora distillery- half its stake was sold to The Distillery Company Limited, and the other half was owned by a Mr James Risk (Wilson). Although it is unclear when Heilbron was added to James Ainslie & Co, there is a note of Mr AN Heilbron attending a meeting of the Whisky Association in 1921, so it is not unreasonable to assume that this might be same Heilbron who added his name to the company (it does not seem to have been a common name in Scotland in this part of the century).

Around 1920 the company (as Ainslie & Heilbron) acquired the Argyll distillery founded in 1844 by Greenlees & Colvill, though this appears to have ceased production in 1923- Moss & Hume. Their most well-known brand was ‘Kings Liqueur’ Old Special, which dates at least as far back as the 1930's. In 1934 the company’s King William IV brand was the first Scotch to be landed in New York after the repeal of prohibition. In 1969 the company took over operations at the second Clynelish distillery.