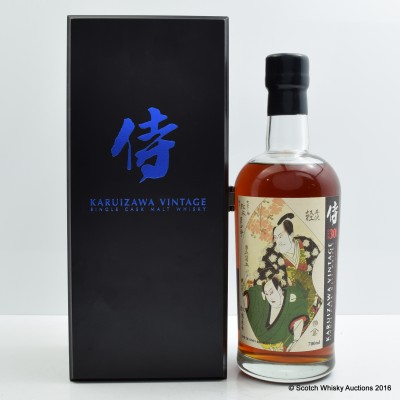 Founded in 1955 with a keen eye on producing high quality whisky, Karuizawa was mothballed in 2000 and since then has achieved the kind of mythical stature reserved for only a select few distilleries. During production it solely used Golden Promise barley imported from Scotland - the Golden Promise was considered vital for long maturation.

Direct fired stills, Sherry casks sourced from Spain and an on site cooperage all contributed to the high quality of their whisky. In 2011 Number One Drinks bought the remaining stock and it has been instrumental in the phoenix-like resurrection of a distillery that rarely released any bottles during its life time.

This forms part of their Samurai cask range.

Bottle Number: One of only 404 bottles released