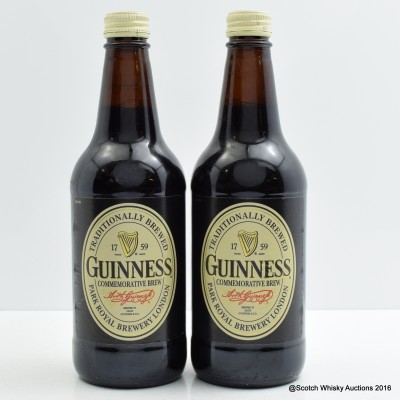 Arthur Guinness began brewing ales at St. James's Gate Brewery on new years eve in 1759. Now owned and produced by Diageo, Guinness is one of the most successful beer brands in the world.

This is a commemorative bottling for Park Royal Operations Team. As you can see, the bottle states it was brewed at Park Royal Brewery, London. Park Royal was built in 1937 and produced Guinness for the whole of the UK. In 1997 Guinness merged with Grand Metropolitan to form Diageo. Diageo ceased production of Guinness at the brewery in 2005. The site was demolished in 2006. A new Park Royal world head office now sits on the former Guinness site.

Please note best before date. Not fit for consumption.