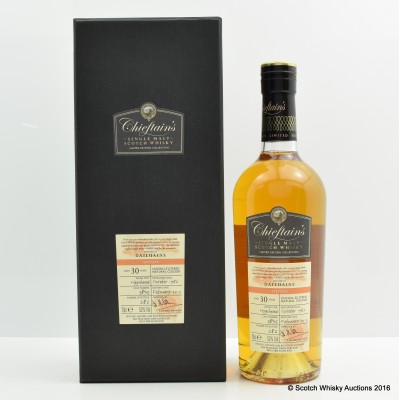 This Dailuaine has been bottled by Ian MacLeod as part of the Chieftain's range.

In 1889 Dailuaine was the first distillery in Scotland to be fitted with a pagoda style roof. Almost all of Dailuaine's output is destined for the Johnnie Walker. In 1991 was it was included in the Flora & Fauna range and it has appeared as a Manager's Dram release as well. The distillery was using condensers made of stainless steel to help create a sulphury style of new make but recently it has been producing a green/grassy spirit, all dependent on what the blending team needs.

Bottle Number: One of only 282 bottles released