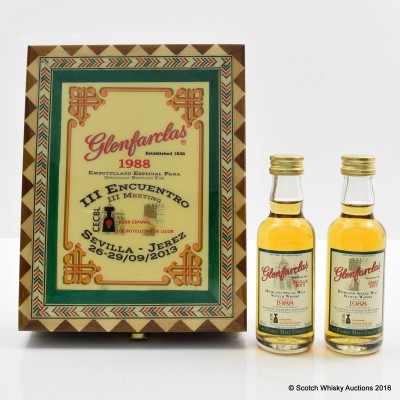 Still in family hands since it was founded, the Glenfarclas Distillery is one of Speyside's independent whisky producers. The Grant family has been running Glenfarclas since 1860, producing an individual Speyside malt that many whisky enthusiasts number as one of their favourites. The water source is melt water from the slopes of Ben Rinnes which runs through granite and heather before reaching Glenfarclas (meaning 'the valley of green grass'). With a long history of bottlings stretching back to the early 20th Century, both proprietary and independent bottlinmgs are much sought after.

This set was specially created for the 3rd Annual meeting of the Spanish Club of Miniature Liquor Bottles Collectors which was held in Sevilla and Jerez in September 2013.

Bottle Number: One of only 360 released