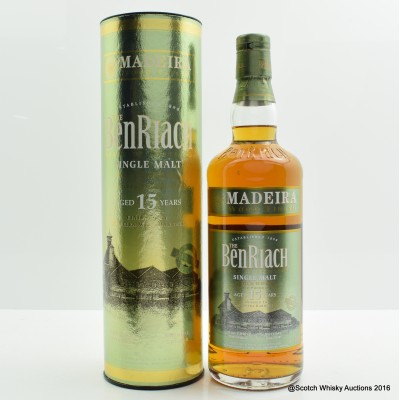 After being founded by the Grant family in 1898, the distillery was mothballed for 65 years with only its floor maltings being used for the Longmorn distillery next door.

Now in the hands of Billy Walker and his partners, it won Distillery of the Year from Malt Advocate magazine in 2007 and has received rave reviews for its peated and un-peated expressions alike.

Matured in the traditional style in American bourbon barrels, this whisky is then ‘finished’ in Madeira barrels, sourced from the semi-tropical island of Madeira.

With only a limited quantity made available world-wide, the Madeira Finish is part of the first BenRiach ‘Wood Finish Series’, released November 2006.

The other ‘finishes’ included in the series are Pedro Ximenez Sherry, Dark Rum and Aged Tawny Port.