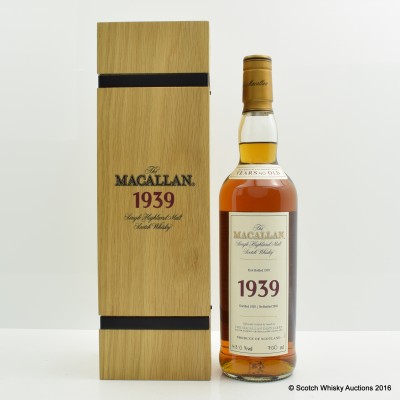 Part of Macallan's prestigious Fine & Rare range. This vintage whisky was first bottled in 1979 as a 40 year old, before being re-bottled in 2002 to fit in with the new range.

As far as cask maturation goes, even Macallan themselves aren't 100% certain, only going as far as to say the colour and flavour "indicates" a second fill sherry cask. Whatever the case, it's certain that this venerable old, peated, dram is a true piece of what we like to call "liquid history".

This bottle was bottled in an outturn of only 54 bottles. It is the third rarest bottle of Fine and Rare series after 1926 (outturn 40 bottles) and the 1937 37-year-old (outturn 48 bottles).

Details from the book : The Definitive Guide to Buying Vintage Macallan – First Edition. Released by Macallan.