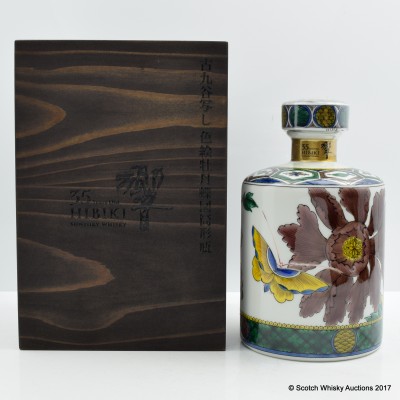 One of a pair of ultra-limited bottlings of 35 Year Old Hibiki released in late 2016, for the Japanese market only. A mere 150 bottles of each were produced - this one is in the Kutani style, while its sister release recalls the more reserved Arita approach.

The Kutani (a territory of Japan) style of Japanese ceramic-ware dates back to the mid-17th Century, after a gold-mine worker in the area named Goto Saijiro was sent by his feudal lord to learn the art of porcelain manufacture in Arita. While the artefacts produced in Arita were more conservative, and discernably Chinese in feel, the Kutani developed their own more colourful, visceral style.