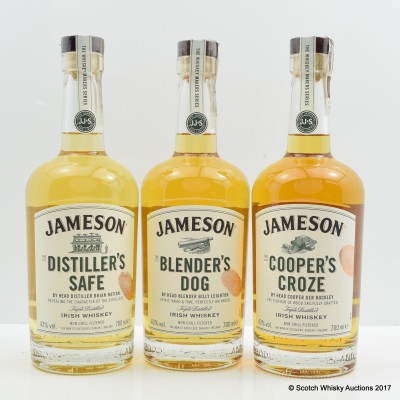 New from Jameson, The Whiskey Makers Series is a three-strong range that celebrates the effect of distillation, cask selection and blending on the final spirit. Each has been chosen by a member of the distillery’s production team: head blender Billy Leighton, head distiller Brian Nation and head cooper Ger Buckley. Each is named after a tool vital to their trade and carries the name and fingerprint of the creator.

The lightest of the series, The Distiller's Safe was selected by head distiller Brian Nation. Focusing on the purity of the distillery's pot-still spirit and the effect copper has on the new-make, this is creamy and a superb example of fruity Irish whiskey.

Named after the instrument used for collecting samples from casks, and created by head blender Billy Leighton, this celebrates the art of blending, so it’s no surprise that this sits in the middle of the range flavour-wise. The Blender’s Dog expertly balances the fruity spirit and spice from the ageing process.

Head cooper Ger Buckley’s whiskey showcases the role of maturation on the final spirit. Aged in a combination of virgin-American-oak barrels, bourbon barrels and sherry butts, which have added notes of toast, vanilla and raisins respectively.