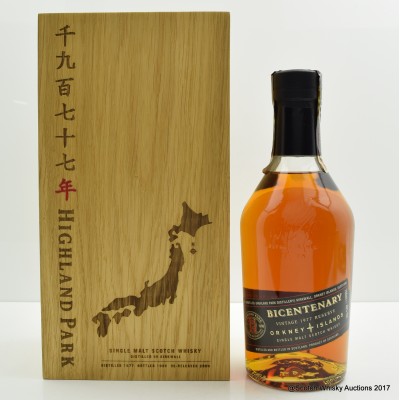 The demand for the first release of the 1998 release was such that no sooner had the bottling been launched, than the entire release was sold out. To support this new release, some bottles were set aside for tasting and sampling. The Japanese allocation sold out with this reserved stock barely being touched.

The existence of this forgotten cache only came to light in 2008. It was decided to repatriate the last 690 bottles of the Bicentenary 1977 Vintage, to celebrate its extended Japanese sabbatical and to offer the opportunity to enjoy this highly-prized and sought-after whisky to a new audience.

The Repatriation bottling comes in a bespoke oak box the embellishment of which follows classic Japanese graphic form. The front of the box features an outline of Japan as well as 1977 depicted in Japanese characters. The use of red as an extra colour is typically Japanese.

The interior of the box features a design adapted from a traditional Japanese wave pattern. The design is embellished with Japanese characters that spell out the words Highland Park.

The bottle has then been wrapped by hand in specially printed Japanese washi paper, a reference to the wrapping paper which was the original inspiration of the French Impressionists, and the Japanese characters depict 1977.