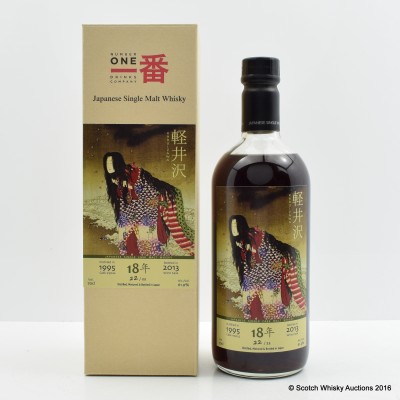 "We’ve always had a soft spot for these Karuizawa ‘Rouge Casks’ but the moment we tried cask #5022, we knew this was something really special compared with its siblings. We immediately decided to bottle this – the last and oldest (18yo) Rouge Cask and the last of the 1995 vintage – but got a bit of a cold shower when we found out how much, or rather how little was left in the cask. The last time it was re-gauged (about a year and a half ago), it contained the equivalent of 30 bottles. But while bottling what little was left, it became clear the angels at Chichibu Distillery (where the cask had been transferred after Number One Drinks’ acquisition of the entire remaining Karuizawa stock) had been particularly greedy. They got away with almost 6 liters and left us with a mere… 22 bottles."

Those who are familiar with the history of the distillery will know that 1995 was the one year in Karuizawa’s 45-year history of production when the predominant use of sherry wood for the maturation of its whiskies was abandoned in favour of the use of barrels that had previously contained Japanese red wine, so called ‘Chateau Mercian Rouge Casks’. Most of the whisky in these casks was bottled for sale at the distillery shop and a few casks were released as private bottlings (a couple for Scandinavia and one for Shinanoya).

This is an incredibly rare bottle of whisky, chosen by Nonjatta.