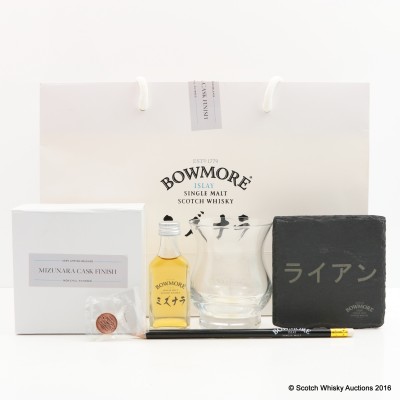 This new release from Bowmore offers something genuinely unique - a Scotch single malt that has been matured in Japanese mizunara oak. This is the first whisky of its kind and stems from the fact that Bowmore is owned by Beam Suntory, the biggest whisky producer in Japan.

Mizunara oak is rare and only grows in northern Japan and small areas of China and Russia. Trees are very slow growing and take 200 years to reach full size. Because of this Beam Suntory only makes around 100 such casks per year and runs a sustainability programme to replant saplings for future generations.

The Bowmore Mizunara Cask Finish is limited to just 2000 bottles. The majority of the whiskies included were initially matured in ex-bourbon casks and a small percentage were in ex-sherry casks. These were hand selected by David Turner and were all distilled in the 1990s.

They were then transferred to virgin mizunara oak casks for a further three years. It is the first time that mizunara casks have ever been exported out of Japan.

Comes in a gift bag with a glass, slate coaster and a pencil.

No stated ABV, but probably the same as its big brother (53.9%) / no stated bottle size.