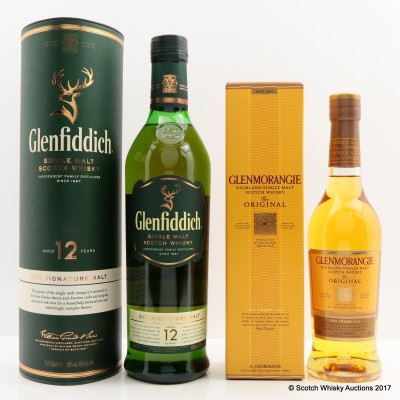 Glenfiddich was founded by William Grant, who had learned his craft at Mortlach, and the first spirit ran from the stills on Christmas Day 1887. They are also credited with creating the world's interest in single malt whisky with the launch of the Straight Malt in 1963. Still family owned, it was the first single malt brand to sell 1 million cases in a year.

One of the world's best-selling old single malts, Glenmorangie's spirit flows from Scotland's tallest stills, over 16 feet tall for those that are counting. Over the years Bill Lumsden has been at the forefront of research into the influence of the cask on whisky and as such Glenmorangie is the leading exponent of whisky 'finishes', be that sherry, wine or virgin oak. The distillery selects its wood from the Mark Twain forest in the Ozark mountains and ensures that the wood is air dried rather than kilned.