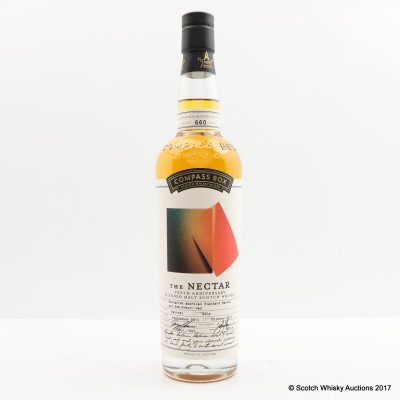 Compass Box are the brilliant blending company that has brought us both ''Spice Tree'' and ''Peat Monster''. Known for its shenanigans and highly experimental whisky projects.

This is a bespoke bottling by Compass Box for the tenth Anniversary of The Nectar in Belgium. John Glaser took some input from The Nectar and created a blended malt with two major parts.

Around 50% is Ardbeg matured in recharred American barrels. The other half is the classic ‘Highland malt’ blend which is used by Compass Box for so many compositions (Clynelish, Dailuaine and Teaninich). This part was matured in new French oak hybrid casks – pretty much the Flaming Heart recipe.

Bottle Number: One of only 660 bottles released