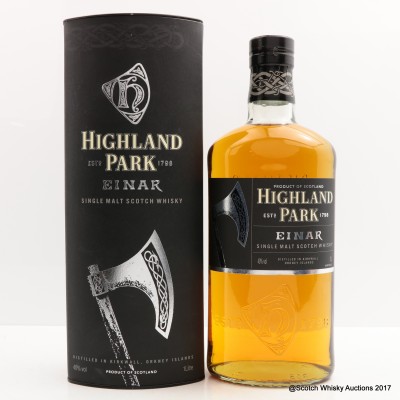 The Warrior Series is a range of six single malts whiskies showcasing the very best of Highland Park. Offering a spectrum of flavours but grounded in Highland Park’s gently smoky but surprisingly sweet character, the palate experiences a full flavour journey from start to finish, beginning with lighter vanilla and citrus flavours and moving to more complex, richer and sweeter flavours.

Highland Park has strong Viking roots and this is celebrated throughout the collection. Uniting legends and characters famed for their battle skills, The Warrior Series brings Highland Park’s dramatic heritage to life in a vivid and innovative way.

The others in the series are Svein and Harald

Einar has been crafted as a tribute to one of the most feared and ruthless Vikings of his time. Driven by a heady mixture of peat smoke and American oak casks, the result is a whisky of bold complexity brought together with the addition of some broody spiciness.

Einar was a hard and successful Viking, often venturing on treacherous long voyages. Relentless and strong, Einar was easily identified by his axe, which was sharp and brutal, reflecting his fierce character, an example of which can be seen on the packaging of this expression.

Described in the Orkneyinga Saga as ‘a hard and successful fighting man’, Einar became the overall ruler of Orkney, deeply upsetting his younger brother Thorfinn.

This bottling exudes many of Einar’s character traits: unrelenting in its flavour it delivers a surprisingly direct smokiness which is coupled with a darker inner layer of spice, driven by a proportion of whisky matured in European oak casks.