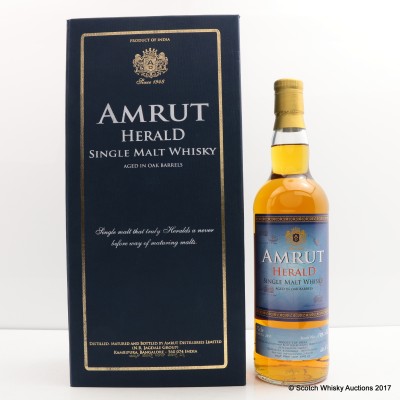 The Indian distiller Amrut is making a name for innovative releases, and its this one has spent a period maturing on the German island of Helgoland.

After four years of maturation at the Amrut distillery, 3,000 feet above sea level in Bangalore four casks of single malt whisky were shipped to Helgoland, 45 miles off the north German coast, where it spent a further 18 months. According to a company spokesperson, Not only was the Helgoland climate a big contrast to tropical India, but the barrels were stored close to the sea. The whisky's strength fell from 64.8% to 60.8% while on the island.

Ashok Chokalingam of Amrut Distilleries adds that "making this malt whisky was a real adventure. It travelled 5,000 miles to the edge of mainland Europe. Then we were able to mature and bottle whisky on Helgoland, for the first time in the island's history."