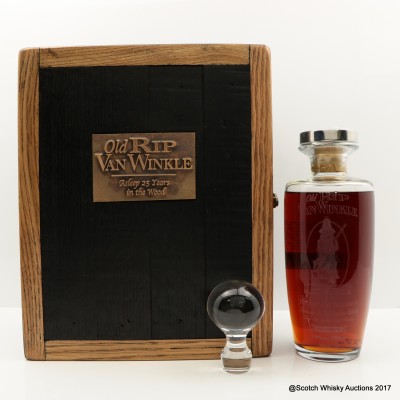 This highly coveted release from Van Winkle was described by Julian Van Winkle III as "a once in a lifetime offering". The spirit was distilled in 1989 (so Stitzel-Weller rather than the "new" Bernheim premises...), with the barrels given a decade's ageing in the nearby family-built warehouse before being transported to Buffalo Trace for the remainder of their maturation. In 2014, the decision was made to transfer the bourbon into a stainless steel vessel to halt the ageing process and preserve the rich, yet perfectly balanced, flavour profile.

Let's be clear, the liquid is the star here - but the fact that the wooden cases which house the Glencairn Crystal decanters happen to be part-crafted from the staves of the 11 hallowed barrels used for ageing is an undeniably classy touch.

With only a little over 700 bottles being produced, this special distillate represents a significant landmark in the super-premium bourbon market.

Please note there are no scratches on the bottle, only reflections.