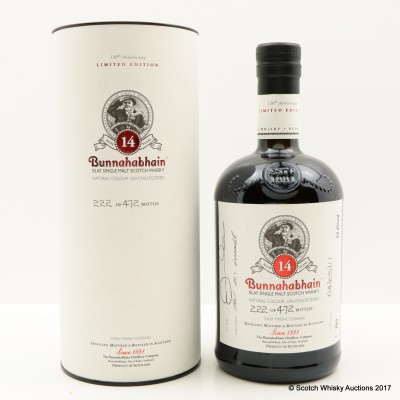 Bunnahabhain started production in 1883 and currently the majority of the spirit it produces is lightly peated, although since 2012 around 20% of the output has been peated at 35ppm. Sheltered from the Atlantic this lighter Islay whisky has an important role in Cutty Sark as well as Black Bottle, while its standing as a single malt has increased since it dropped colouring, chill filtering and increased the bottling strength of its core range to 46.3%ABV.

Bunnahabhain's first ever 'Cognac' finish, a Limited Edition 14 year old, created to celebrate the distillery's 130th Anniversary and released during the Feis Ile 2011.