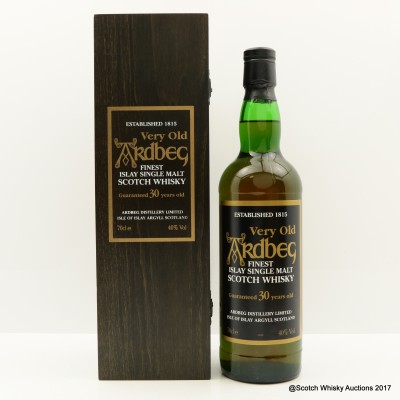 Ardbeg has had a stormy history of closing and then re-opening with many owners over the years.

This bottle of 30 year old Ardbeg has gone through it all. It was distilled back in the 1970s when Ardbeg still did its own floor maltings (a practice which was stopped in the late 70s).

There was a silent period during the 1980s and an ownership change in early 1990s when Allied Distillers took over. A regime of part time production was resumed with just 2 months distilling a year. In 1996 this legendary Ardbeg was released before Allied sold the distillery in 1997 to Glenmorangie.

So what can we say about this legendary 30 year old? Whilst there was much happening to the distillery, the cask was lying there in the quiet darkness of the Ardbeg warehouse, just waiting for its chance to shine. The resulting whisky is one of those phenomenal drams that makes Islay fans all go a bit misty eyed!