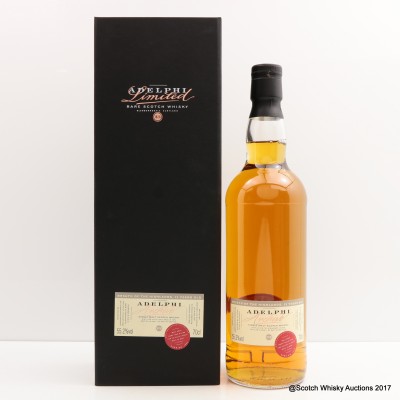 The Adelphi Distillery was founded in 1826 by brothers Charles and David Gray, and was sited just south of the Victoria Bridge, at the edge of the Gorbals area of Glasgow. It was purchased by Distillers Company (DCL) in 1902, and by 1907 distilling had been stopped completely. The buildings of the distillery were demolished between 1968 and 1970, and the chimney was dismantled in 1971. The great-grandson of one of the distillery's founders, Jamie Walker, established the modern day Adelphi independent bottler in 1993, selling the company to Keith Falconer and Donald Houston in 2004. Whiskies are selected by a nosing team chaired by whisky critic Charles MacLean. Adelphi has received numerous Malt Maniacs Awards.

This whisky comes from an unnamed Highland distillery.

Bottle Number: One of only 64 bottles released