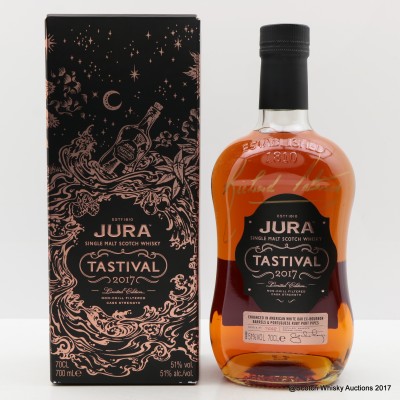 Located on the West Coast of Scotland is the Isle of Jura, where the red deer population outnumbers the human population by 25 to 1. The island lies only 60 miles from Glasgow (as the crow flies), yet can take rather a long time to reach. It consists of one road, one pub, one distillery and one shop and is often described as remote. In fact, while writing the classic "1984", George Orwell described the island as "The most un-getable place". Originally built in 1810, the distillery fell into disrepair and wasn't revived until the 1960's by two local estate owners.

This release for Jura's "Tastival" has been finished in Ruby Port pipes and first-fill Bourbon barrels.

This particular bottle has been signed by master blender Richard Paterson.