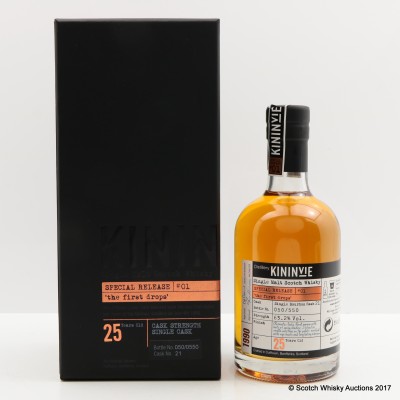 Up until very recently, Kininvie was hidden away. Sharing a site with its more famous sister distillery Balvenie (they share mashtuns and washbacks but have separate stills), Kininvie has been producing malt whisky for the blends of William Grants without the spotlight of its own product.

However, this has all changed the with the release of small batch editions. There have been a couple of releases of Kininvie previously under the Hazelwood name but these were only available to staff.

William Grant & Sons are marking Kininvie distillery’s 25 years of operation with the release of three of the first casks to be filled from its inaugural run. Cask numbers 8, 20 and 21 will be individually released in three separate single cask bottlings as Kininvie Special Release #1 ‘The First Drops’, each of which has been allocated for sale in Taiwan, mainland Europe and the UK respectively.