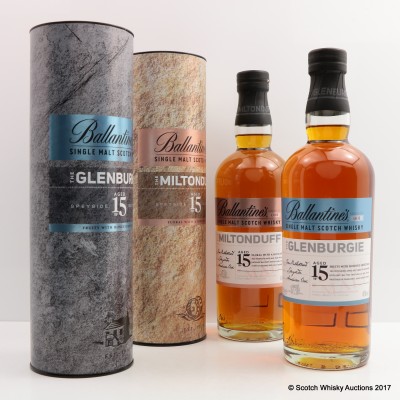 This dual lot of series one Glenburgie 15 year old and series two Miltonduff 15 year old are bottled for Ballantine's.

Please note the dent on the bottom of the tube.

Miltonduff is a vital component to the Ballantine's range and the majority of its output is used in the world's second best selling blended whisky. Interestingly the distillery once used triple distillation and also Lomond Stills for a while, although not at the same time. The spirit that ran from the Lomond Stills was called Mosstowie and it was discontinued in 1981.

Please note the denting on the lid of the tube.