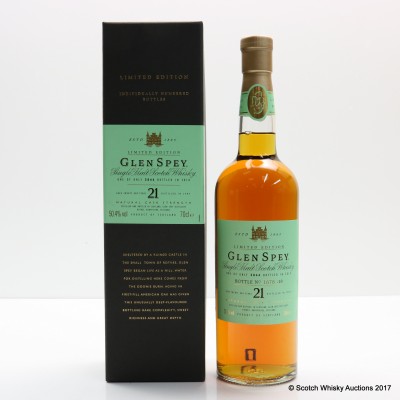 Mill of Rothes was founded in 1878 by local grain merchant, James Stuart who was the then licensee of Macallan. In 1888 he renamed the distillery to Glen Spey, bought Macallan out and sold it to London Gin giants, W&A Gilbey, whom set to work creating the infamous Spey Royal blend. Eventually merging with London wine vendor, Justerini & Brooks, the distillery then created IDV, and set out to perfect the J&B blend in time for yet another merger in 1997. This time it saw a partnership between IDV and Guinness which brought Diageo into fruition.

According to The Whisky Exchange, one of the most exciting of 2010's Special Releases, this 1989 Glen Spey is the first mainstream bottling of note from this distillery, and is comfortably the oldest OB Glen Spey ever released. A vatting of new American oak casks 'that had also held sherry'.