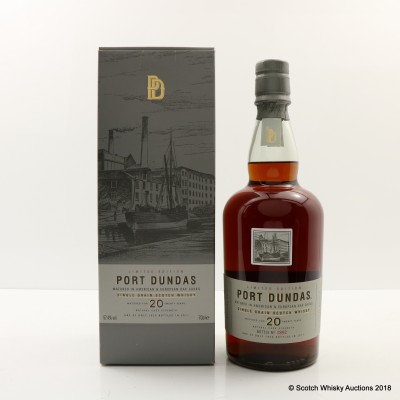 Port Dundas was one of the founding members of drinks conglomerate, Diageo, (previously known as DCL in 1860 when Cowlairs merged with Port Dundas). By 1885, its three Coffey and five pot stills earned it the title of largest distillery in Scotland. Sadly it fell on hard times in the 70’s when it sorely needed an upgrade, yet Diageo’s focus for grain production was set on Cameronbridge. In 2011, production ground to a halt and the silhouette of the 138 metre, brick chimney, which was once the highest in the world, got entirely demolished and its story came to an end.

This 20 year old was the first grain whisky to be part of Diageo's yearly Special Releases range. This spent 3 years in bourbon casks before being 'finished' for a further 17 years in new European oak, first fill Bourbon and Sherry casks.