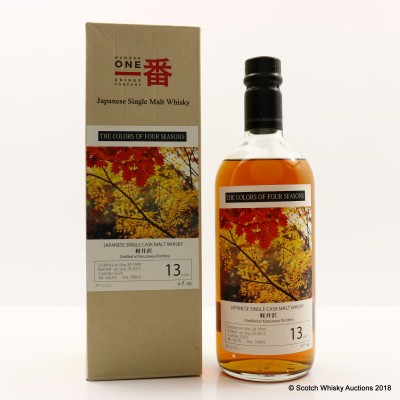 Jumping ahead to 2007, independent bottler Number One Drinks acquired the distillery's remaining stocks, and imported Ocean Karuizawa Distillery whisky (as it was re-branded to in 1977) for the European market. The rarity of official expressions, and the now finite supply made for an explosive combination in the world of rare whisky, with die-hard collectors clamouring to get hold of any releases, and driving a buoyant second hand market. The rest, as they say, is history. This final vintage distillation Karuizawa is part of a series of seasonal releases called "The Colors (note the incorrect American spelling of the word colour) of Four Seasons". This release in the series represents Autumn (or Fall).