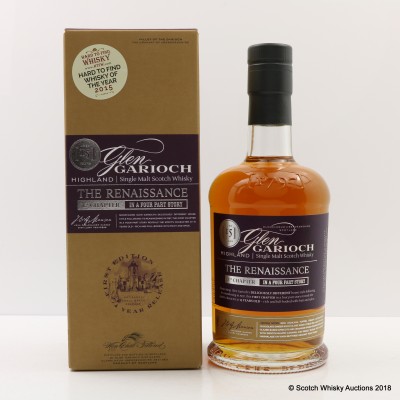 Glen Garioch distillery was founded in 1797 by John Manson, making it amongst the oldest distilleries in Scotland, and is known for its heavy, thick, cereal and spicy notes, which are attributed to its short fermentation period. In 1908 the distillery was bought over by Sanderson & Son, before merging with Booth's Distilleries and then DCL by 1937. Sadly, by this point production was slowing down, and in 1968 things finally came to a halt, closing down the operation due to struggles with water supply.

Thankfully in 1973, P. Morrison, owner of Bowmore and Auchentoshan, came to the rescue, securing a new water source and reopening the distillery. He also introduced innovative heat recovery systems, which were not just of benefit to the distillery, but the surrounding town as well, heating greenhouses and the local swimming pool. Glen Garioch has continued this spirit of innovation by being one of the first distilleries to release a Virgin Oak matured expression, as well as bottling its core range at 48% ABV with no chill filtration..

The first release in the Renaissance series. Chapter One (its being released in four chapters) is an unpeated 15 year old single malt Scotch whisky matured in bourbon and Sherry casks. The whiskies from this series will all be distilled after 1997, a brief period where the distillery was closed. 12,000 bottles were produced.