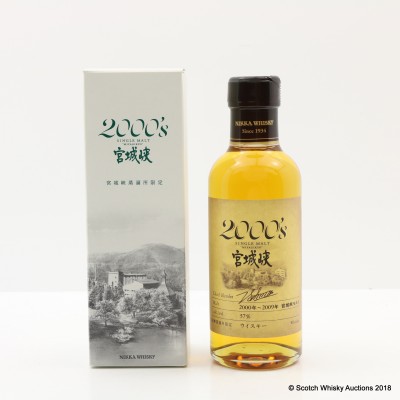 The Nikka whisky company was founded in 1934 by Masataka Taketsuru, with the creation of his Yoichi distillery on the island of Hokkaido. Arguably the “grandfather” of Japanese whisky, Taketsuru learned his trade studying Organic Chemistry at The University of Glasgow in 1918, before apprenticing at Longmorn, and laterally Hazelburn distilleries. With humble beginnings, producing apple juice and cider to keep the cash flowing whilst the whisky came of age, Nikka has grown to become one of the best known names in Japanese whisky.

Originally dubbed "Sendai", the distillery we now know as Miyagikyo (renamed in 2001, after the Japanese prefecture of Miyagi where it's situated) was born out of a desire by Masataka Taketsuru to produce a Scottish style blended whisky. In order to realise this dream Taketsuru would need an alternative source of malt whisky to blend with malt from his already established Yoichi distillery, so in 1968 construction on the new distillery commenced. While, like Yoichi, Miyagikyo experiments with different peating levels, the whisky produced there is lighter and more delicate, providing an interesting counterpoint to its sister distillery's more robust style.

This is Miyagikyo’s take on decade 2000 to 2009. Each bottle contains malt from throughout the decade.