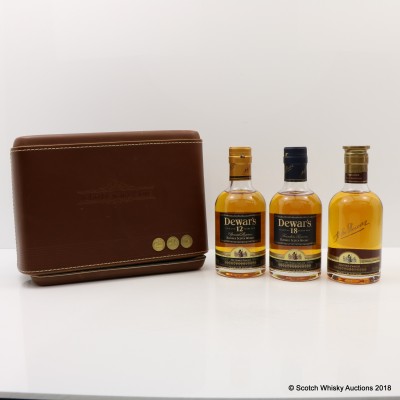 The brand was created by John Dewar, Sr. in 1846. Under the control of his two sons, John A. Dewar Jr. and Thomas "Tommy" Dewar, it expanded to become a global market leader by 1896. Tommy became famous as the author of a travel journal, Ramble Round the Globe, which documented his travels while publicising the Dewar name. Dewar's eventually expanded its product by constructing the Aberfeldy Distillery in 1896.

Dewar’s rose to prominence in the United States when Andrew Carnegie requested a small keg of Dewar’s Scotch whisky be sent to the White House upon President Benjamin Harrison’s inauguration. Carnegie also sent the same gift to President James Garfield on his inauguration eight years later.

The company became part of the Diageo empire, before being sold to Bacardi in 1998.

This leather-clad Traveller's Pack from Dewar's contains a selection of three of its blends.