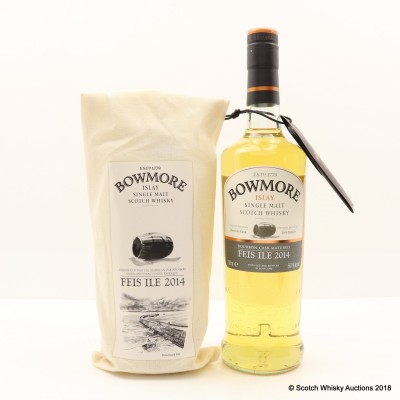 Surely there are few locations more evocative than the shores of Lochindaal, an area positively steeped in rich Scottish folklore. It's no wonder then that Bowmore has a whiff of magic about it (or perhaps that's just the whisky). The oldest distillery on Islay, Bowmore still retains its own floor maltings, and while they can no longer meet all of the busy distillery's requirements, they still contribute a third of the malt used in every mash.

Just because something is old, doesn't mean it's old-fashioned, and Bowmore's eco friendly heat recovery system not only cuts down on those pesky bills, it also heats the town swimming pool!

After the success of the bottle release in 2013, Bowmore deployed the same tactics that worked for the 2014 festival. Staggering the release of the 1000 bottles, so 700 were released on the Saturday (first day of the festival) and the last 300 bottles were put on sale on its "official" open day.