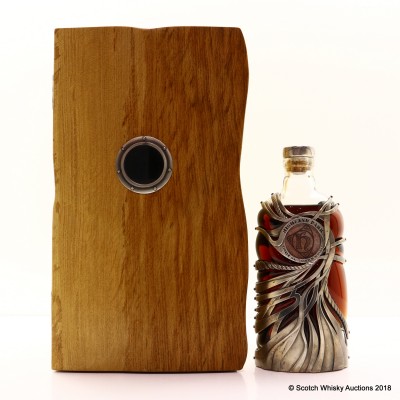 A masterpiece in every sense, this ultra rare release from Highland Park is one of the most stunningly presented whiskies we have ever seen. To be fair, it really had to be, given the legendary status of the liquid contained within.

After discovering five rather special 1960 vintage Sherry casks in their warehouse, Highland Park decided to use a process of "cask harmonising" (essentially marrying the contents in additional refill sherry casks) in order to create the perfect dram.

The whisky is said to show all the complexity and rich fullness that one would expect from liquid that has been in the cask for 50 years, with tobacco, fruit and spices to the fore.

The jaw droppingly beautiful bottle is wrapped in a handcrafted silver cage designed by Maeve Gillies, an internationally-renowned Scottish jewellery maker, which celebrates the influence of the sea, wild weather and the passage of time, all of which have helped shape this remarkable whisky.

Bottle Number: One of only 275 bottles released.

Please note box and booklet are signed & minor wear to back of box.

Please note that due to the size and weight of this item, additional shipping costs will apply.

Featured in The 92nd Auction, ended December 2, 2018
Send to a friend or post on:
FacebookTwitter