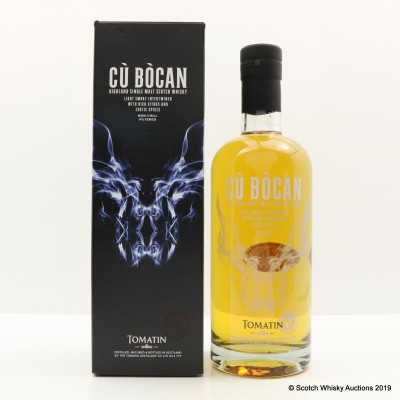 Tomatin Distillery was founded in 1897 and spent most of its life producing whisky for the blending industry; however, in the 1970s it was Scotland's biggest producer of single malt whisky. In 1986, the distillery became the first fully Japanese-owned Scottish distillery when Takara Shuzo joined forces with trading company Okara.

Since 2004 when the 12 Year Old was first released, Tomatin has been bottling more of its own single malts of varying age expressions and in 2013 the distillery released the first peated Tomatin, known as Cù Bòcan.

Cù Bòcan has stalked residents of the remote Highland village of Tomatin for centuries, his legend embellished by the hellhound's increasingly fractious behaviour.