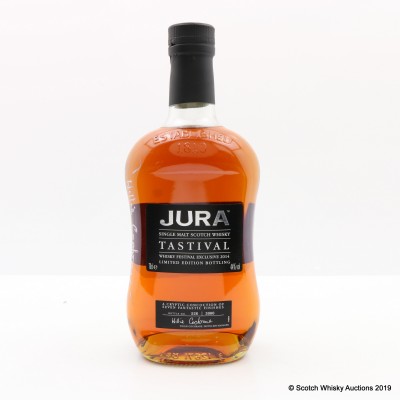 Located off the West Coast of Scotland is the Isle of Jura, where the red deer population outnumbers the human population by 5000 to 200. The island lies only 60 miles from Glasgow, (as the crow flies), yet can take rather a long time to reach.

Originally built in 1810 the distillery fell into disrepair and wasn't revived until the 1960s by two local estate owners. It is now under the ownership of Phillipinesbased "Emperador INC".

Released for the Jura Tastival which was held during the Feis Ile 2014, this Jura has passed through a colossal seven different casks. These are, in no particular order;

Bottle has been signed by Distillery Manager Willie Cochrane.