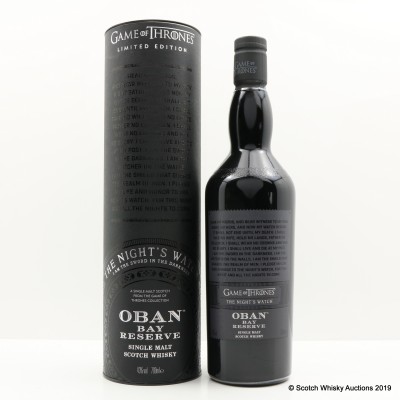 Towards the latter half of the 18th century, the Duke of Argyll, keen to encourage economic prosperity in the region, offered extremely low rents to people willing to settle on his lands. Two people who took advantage of this opportunity were the Stevenson brothers, who utilised a slate quarry on the island of Belnahua to expedite construction of several buildings, including a brewery, in the mainland fishing village of Oban. It wasn't long until this brewery branched out into distillation, and thus the Oban distillery was born.

The distillery is still relatively small in terms of production, and chooses not to operate at its full capacity, favouring a long fermentation period in an effort to preserve the characteristic style that has won it so many admirers, especially in The United States.

As fans wait for the final series of the epic HBO drama, Diageo help ease the tension by releasing a range of eight bottlings - one for each season of the show - from eight different distilleries across the Scottish regions each representing a Game of Thrones House and adorned with the respective crest; supposedly with some connection between the dynasty and the distillery.