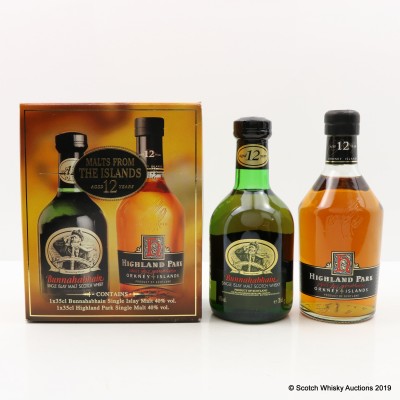 A lot containing a Bunnahabhain 12 Year Old and a Highland Park 12 Year Old.

Bunnahabhain started production in 1883 and currently the majority of the spirit it produces is lightly peated; although since 2012 around 20% of the output has been peated at 35-45ppm. Sheltered from the Atlantic, this lighter Islay whisky has an important role in Cutty Sark as well as Black Bottle, while its standing as a single malt has increased since it dropped colouring, chill filtering, and increased the bottling strength of its core range to 46.3% ABV.

Please note some wear and creasing to carton.