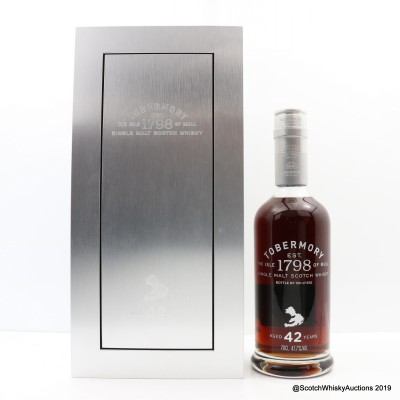 In 1993, the distillery was purchased by Burn Stewart Distillers, who also own Bunnahabhain and Deanston. Under their guiding hand, the distillery is undergoing somewhat of a renaissance, eschewing chill filtration and caramel colouring, along with introducing a higher standard strength of 46.3% ABV. This, in conjunction with some intriguing wine cask finishes, and the success of their peated Ledaig range (pronounced led-chig), has allowed the company to reinvest in the distillery, in order to increase output. Good news for everyone.

This is some of the oldest spirit to come out of the picturesque island distillery since it reopened in 1972. To the back of the sleek metallic box hides a print of the colourful Tobermory village by Angus Stewart.