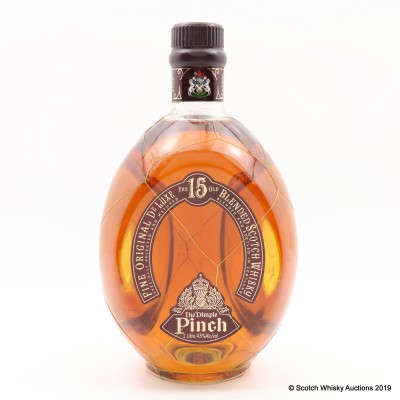 Robert Haig was distilling as long ago as the early 17th century - making them the oldest Scotch whisky distillers in the world - but his great-grandson was the one to commercialise the family tipple. By 1733, only the decade after it had been founded by Kane McKenzie Haig, the Stirlingshire-based distillery became Scotland's largest and the world's first commercial distillery. The family also went on to establish the predecessor of the Jameson distillery in Bow Street, Dublin. Nowadays the home of Haig is known as the Cameronbridge distillery and is recognised for making grain whisky.

Haig Dimple - known as the Pinch in the US market - is a more expensive blend with a high malt proportion, with malt whisky from Glenkinchie and Linkwood. Bottled in one of the world's most recognisable bottles this blend remains a perennial favourite of the world's whisky drinkers.

Please note some wear to labels and bottle.