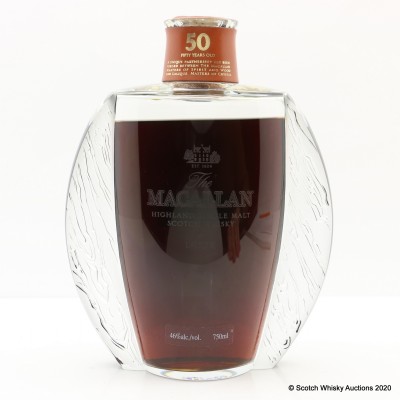 Released in 2005 and limited to only 470 individually numbered decanters worldwide, the first decanter in the Lalique Six Pillars Collection contains an alluring 50 Years Old Macallan single malt. Taking their inspiration from the exceptional oak casks in which The Macallan is matured, the master craftsmen of Lalique created a decanter which unites intricately etched details that represent our mastery of wood with a realisation of the art nouveau style that is synonymous with Lalique.

Macallan's monumental Six Pillars Collection has become one of the most sought after series in the whisky world. A collaboration between the distillery and French crystal makers, Lalique, this first "Pillar" debuted in 2005 celebrating the "exceptional oak casks" on which Macallan has built its reputation.

Bottle Number: One of only 470 decanters released.

Please note there is not box or stopper included with this lot.

Featured in The 106th Auction, ended February 2, 2020
Send to a friend or post on:
FacebookTwitter