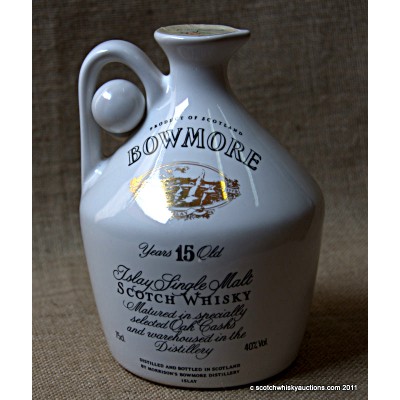 It was held in Glasgow between 26 April and 26 September1988. It was the first event of its type to be heldin the city in 50 years,since the Empire Exhibition of1938, and also marked the centenary of Glasgow's first InternationalExhibition, the International Exhibition of Science, Art and Industry of 1888.

It attracted 4.3 million visitorsover 152 days, by far the most successful of the five National GardenFestivals. Its significance in the rebirth of the city was underlined by the1990 European City of Culture title bestowed on Glasgow in September 1986. Thetwo events together did much to restore Glasgow to national and internationalprominence.

This Bowmore 15 was bottled in aceramic flagon to commemorate the Garden Festival in 1988.It is a 75cl bottleat 40%

Featured in The Second Auction, ended June 5, 2011
Send to a friend or post on:
FacebookTwitter