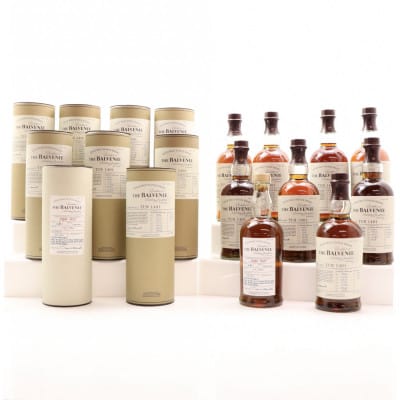 Built by the Grant family in Dufftown and situated next door to sister distillery Glenfiddich, Balvenie is at the heart of Grant's range of blends. Despite their proximity and shared water source, the style of spirit produced by the pair are quite different, with Balvenie producing a sweeter, more honeyed and very lightly peated new make spirit.

It wasn't until 1990, when Kininvie distillery was able to shoulder some of the responsibility for blending stock production, that Balvenie was really able to push forward as a single malt. The distillery quickly distinguished itself through use of innovative maturation processes, and was a pioneer of cask "finishing" with the introduction of its Doublewood expression in 1993. Balvenie is also one of the few remaining distilleries still using onsite maltings; although today this only meets a small percentage of its requirements.

Bottle Number: One of 2226 bottles released

Bottle Number: One of 1800 bottles released

Batch 4 was made for travel retail.

Bottle Number: One of 2500 bottles released

Bottle Number: One of 2862 bottles released

Batch 6 is the second batch to be released exclusively in the United States. Crafted by the industry's longest-serving Malt Master, David Stewart.

Bottle Number: One of 2500 bottles released

Batch 8 is destined for the UK, Canada and Australia, with only one in three batches reaching these destinations. (Others go to the US or travel retail).

Bottle Number: One of 2700 bottles released

Batch #9 is exclusively for the United States and is extremely limited in quantity. It was bottled this year and is a marriage of 11 traditional whisky casks and three sherry butts.