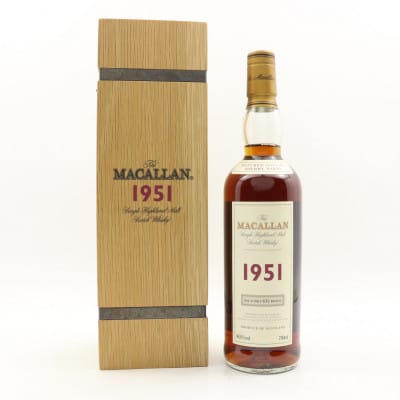 Launched in 2002, Macallan’s flagship Fine & Rare range showcases nearly eight decades of the distillery’s history. Comprised of expressions bottled using some of their oldest stocks, as well as rare Gordon & MacPhail releases that were bought back from private collectors and rebottled, the series represents the Holy Grail for many whisky enthusiasts, with examples frequently setting records at auction. We particularly like their understated packaging that sits back and lets the whisky do the talking.

It was the year the Ford Consul was introduced, as well as The Archers. More importantly, the Stone of Scone, aka the Stone of Destiny, was found in Forfar, having been liberated from London (or so they thought!).

A wonderful 1951 vintage release from The Macallan Distillery, bottled as part of their Fine & Rare Series. Two Sherry butts were filled back in December 1951 and left to mature in the same warehouse for five decades.

Bottle Number: One of only 632 bottles released

Featured in The 126th Auction, ended December 5, 2021
Send to a friend or post on:
FacebookTwitter