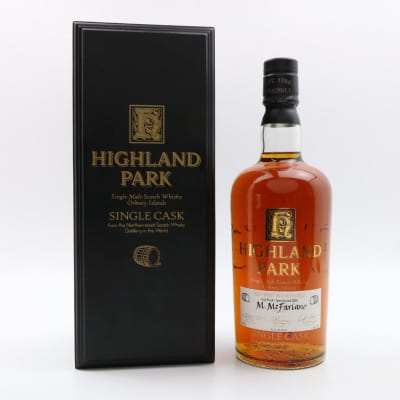 The most northerly of Scottish whisky distilleries, Highland Park was founded in 1798 and is one of the most highly regarded single malts in the world, the great Michael Jackson calling it, "The greatest all-rounder in the world of whisky" and F. Paul Pacult awarding it "The Best Spirit in the World" in 2005. The unique peat of Orkney gives the whisky a distinctive heathery sweetness.

Who better to describe this bottling than Highland Park itself:

Gerry (Tosh) had been sampling a number of single casks and it was getting rather late into the afternoon, however he had several samples to nose and assess before going home. He takes the time to assess these casks so when on his travels, he can talk with authority about each individual whisky.
When Gerry first nosed cask #43 it stood out above all the other single casks he had assessed during the week that had been drawn by Max McFarlane, Whisky Maker at Highland Park.

The main reason for being outstanding was that it handled the high strength (56.1%) very well. Although Gerry knew he was sampling high strength whisky it had a tremendously good balance which masked the obvious cask strength. The main reason for its selection was the after taste. It is the unusual buttery finish which makes this stand out; Gerry obtained several bottles for his own personal consumption.