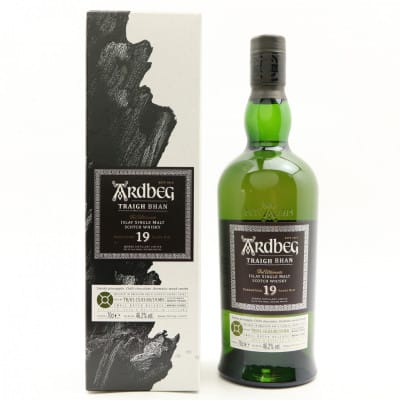 Since its establishment in 1815, The Ardbeg distillery has been on a tumultuous rollercoaster ride of ownership changes, closures, and reopening. Stability was only achieved relatively recently, when the ailing distillery was purchased in 1997 by industry giants, Glenmorangie. The subsequent years have seen the distillery’s popularity swell, with fans enticed by the signature style of tarry, sooty smoke, balanced against citric sweetness and an oily mouthfeel. While Ardbeg still retains its distinctive personality, it has definitely been influenced by Glenmorangie’s propensity for experimenting with cask finishing, and (dare we say it) NAS expressions.

Joining the range in 2019, Traigh Bhan is a small batch, annual release that takes its inspiration from a beach on Islay's west coast, known locally as The Singing Sands. Matured in a combination of bourbon and oloroso casks, the expression marks the first addition to the distillery's core range to sport an age statement since the full reintroduction of the 10-Year-Old in 2008.

Featured in The 139th Auction, ended January 8, 2023
Send to a friend or post on:
FacebookTwitter