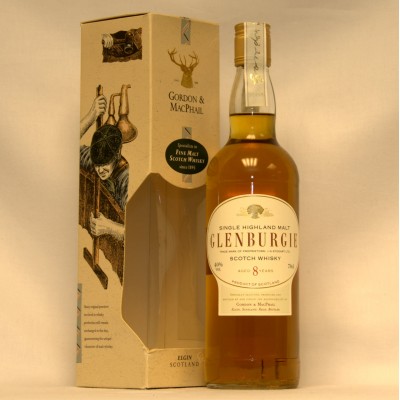 Eight years old and bottled by Gordon and MacPhail. 70cl and 40%

From our friends at http://www.whiskymerchants.co.uk

The distillery is reported to have been established in 1810 (a copper plaque on the building behind the current distillery says :“This building was build in 1810". The upper floor contained the distillery and customs and excise offices and the lower ground floor the original distillery warehouse” However from the archives it apears that the construction of the distillery was in 1829, when William Paul started whisky distilation.

William Paul remained the owner of the distillery up to its closure in 1870. Up till then distillery was called Kilnflat. In 1878.the distillery was renamed in Glenburgie with Charles Hay as manager. When Alfred Barnard visited it in 1887, he described Glenburgie in his book 'Whisky Distilleries of the United Kingdom', as "a very ancient distillery, and about as old-fashioned as it is possible to conceive".

Alexander Fraser became owner of the distillery in 1895, as The Glenburgie limited company.

Due to the downturn in the whisky market triggered by the Patison Crash (1900) the tough war years followed by the introduction of prohibition in the USA the distillery was declared bankrupted in 1925, Donald Mustard, a soliciter from Elgin, became the owner of Glenburgie after this bankruptcy.

In 1936 Glenburgie became the first distillery to be managed by a woman Margaret Nicol. She retired in 1959 Althought there had been women owners before..

During 1958 two Lomond pattern stills where added. These stills, known as Glencraig, allowed the distillery to produce two different whiskies. The Glenburgie, from the traditional pot stills. Glencraig from the Lomond stills

Glencraig was named after Mr William Craig, production director of Ballantines at that time. He was actually one of the few men to have a single malt named after him.

Some Glencraig can still be found however it cannot be distilled again as in 1981 the Lomond Stills were replaced by a pair of conventional pot stills.