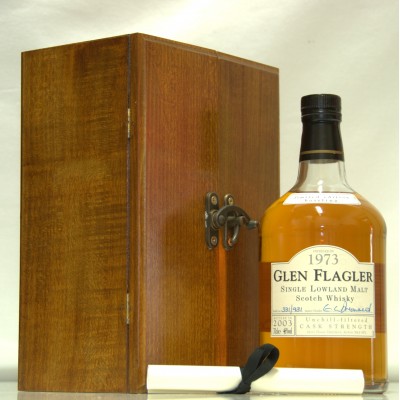 From our friends at Master of Malts:

"The site once hosted the Moffat grain distillery as well as a paper mill. Founded in 1965 under the name Glen Flagler, the distillery also produced Killyloch malt whisky and Garnheath grain whisky. For some time both Glen Flagler and Killyloch were released as separate single malts before being more latterly vatted together, there were two different sets of stills, one set for each.

The Glen Flagler distillery sits in the central Lowlands as was purchased by Inver House Distillers Ltd, shortly after being founded. They had acquired the distillery with the intent of supplying Scotch whisky for blending. Inver House had a base of operations at the site and operated their own maltings, providing a lighted peated malt for the distillery, that gave a Speyside-like character.

Following the boom and bust that ensued in the whisky industry after the Second World War and the subsequent depression felt in the late 1970s and 1980s the distillery began to close down. First were the stills of Killyloch in 1975, followed a decade later by those of Glen Flagler. The distillery operated for a mere twenty years, accordingly single malt whiskies from either Killyloch or Glen Flagler are very rare"

Good job we've got one of both!